Canada, the UK and Australia are three popular study destinations for students looking to study internationally. But, Canada vs the UK vs Australia – which country is the best for international students?

Each of these countries has something quite different to offer. The beautiful mountains of Canada, stunning beaches of Australia and exciting cities of the UK may all appeal to you – but which country really does offer the best university experience? Read this article to find out more.

Weather in the UK is, unfortunately, generally mild and rainy. Although the summer and winter seasons offer extremes of warm summer days and snowfall, rain is the more commonly found weather from throughout the year. In the summertime, temperatures generally sit between 15 and 25 degrees Celsius, whereas winters are much cooler at around 0 to 7 degrees Celsius.

The weather in Canada varies across the country, depending on the location at which you choose to study. The country stretches across five time zones from the Pacific to the Atlantic, and its weather is just as broad ranging. Toronto offers a cold and snowy winter with an average temperature of -4.6 degrees Celsius. It can get as low as -20 sometimes!

And take note, this is considered a milder winter temperature than found in other Ontario towns and cities. The summers in Toronto tend to be hotter than the UK with temperatures averaging 20 to 35-degree Celsius.

One reason for Australia being such a popular study destination is the amazing weather it offers year round. In contrast to the often cold weather found in Canada and the UK, Australia offers much more sunny climes, and beautiful beaches to enjoy it on, too!

Average fees in Canada are broader and offer both cheaper and more expensive options than the UK, dependent on your programme of study and choice of institution. The bottom end of the average in Canada is lower than the UK, with average undergraduate fees starting at US$7,500. However, the average tuition fee cost in Canada goes up to US$22,000. Postgraduate fees average at a similar price to those in the UK, ranging from US$11,000 to US$26,000.

In addition to tuition fees, other costs need to be considered when thinking about studying abroad. The average cost of living that includes the cost of rent and living expenses for the duration of the course is important.

In the UK, rent and living costs are estimated at between US$12,000 and US$15,000 per year. Most undergraduate degrees (except for languages and medicine related programmes) tend to last for three years in the UK. That makes a total cost of living of $36,000 – $45,000 for the duration of a UK undergraduate degree programme. This price is likely to increase if you choose to study in one of the more expensive cities, such as London.

The cost of living in Canada for international students is cheaper than in the UK. It is estimated that US$7,500 to US$9,000 is needed for rent and living expenses each year. Again, this will of course increase if you are living in one of the more pricier cities, such as Vancouver. However, it is important to note that degree programmes in Canada are four years long.

So, although the yearly cost is cheaper, over the course of study you will need US$30,000 to US$36,000 in total, making it only slightly less expensive than the UK.

As part of the visa application process, potential international students for Australia must prove that they have access to US$14,000 per year to cover the costs of living. Australia is known to be a very expensive country. For residents there, wages are much higher than for people in other countries, and so the high cost of rent and consumables does not cause them any problems.

However, for students, it will mean that you must carefully budget. Undergraduate degree programmes in Australia are generally three years in length, the same as the UK, meaning that a total of US$42,000 is required in total to cover the cost of studying for a degree in Australia.

Postgraduate study is 1-2 years in all three countries. 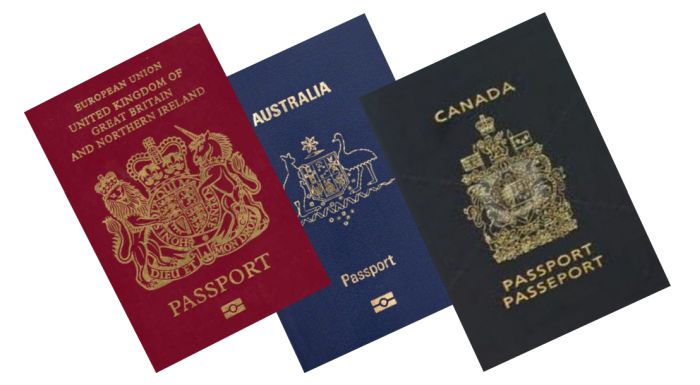 It has become increasingly difficult for international students to remain in the UK and seek employment upon graduation over the past seven years. In 2012, then Home Secretary Theresa May, changed the law so that students could only stay in the UK for two months after the end of their studies.

The government later recognised this as unfair and extended it to two years. University organisations and some politicians are now lobbying for this to be further extended to two years. However, it is still stuck at six months at this current time.

In contrast, Canada has a low population and is often seeking individuals to take on highly skilled workers. It, therefore, offers many more opportunities to international students to remain in the country upon graduation. It’s a visa program, the PGWP (Post-Graduate Work Permit) allows students to stay and work in the country for three years if the application is successful. Once this visa has been approved, students are then able to apply for permanent residency.

Australia is also more open to international students remaining at the end of their studies. It offers a Skilled-Graduate Temporary visa that allows international students to stay in Australia for 18 months after graduation. This can be to gain additional work experience or even travel around the country! The Skilled-Independent (Resident) Visa can be applied for to give permanent residency to those who have completed two years of study in Australia.